Come back shortly for some AWESOME Waterloo homes for sale! 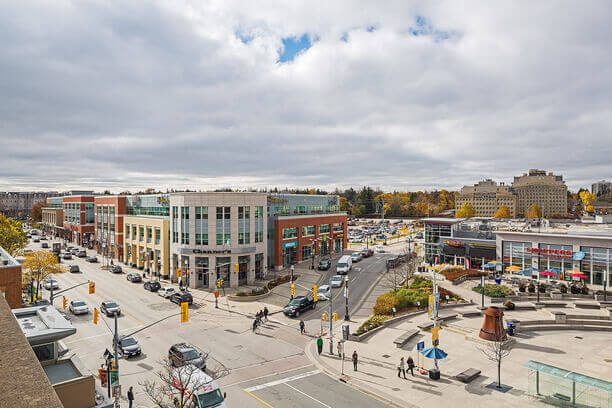 The City of Waterloo has a population of over 120,000 and shares a border with Kitchener, which is also focused on technology and community. The city spreads over 675,000 acres which is a size of over 32 square miles.  The DNA of the City dates back to the 1800s at a time where the Mennonite Farmers had an extremely high power over the region. Over the centuries the work ethic and highly specific planning of the Mennonites continue to show itself in interesting ways in Waterloo, from its Mennonite established University of Waterloo and political planning that lasts to this day.

Waterloo has great insurance and high-tech companies, with the largest employers Sun Life Financial, University of Waterloo, Financial Manulife, Open Text, BlackBerry, Sandvine and Wilfred Laurier University.  For those that haven’t checked out Blackberry in a while its time to check again. Blackberry is still Canadas largest tech company, and it’s not the only large tech company in Waterloo. It is clear from these prominent employers that the economy is strong in technology, insurance and education. Waterloo also has three major think tanks that add the great diversity of the local economy:

The economy of Waterloo will remain strong in the coming years due to the high technology concentration. The economy is truly ahead of the curve.  Some notable high-tech companies in Waterloo are:

The city also hosts: the Perimetric Institute of Theoretical Physics, an advanced center for the Foundation’s study, theoretical physics, and award-winning pedagogical dissemination in science; the Institute of Quantum Computing, at the University of Waterloo, which conducts innovative research in computer science, engineering, mathematics and natural sciences and the Center for International Governance Innovation, an independent and impartial expert group dealing with the challenges of international governance. The city is part of the Canadian Technology Triangle (TTC), a joint business promotion initiative in Waterloo, Kitchener, Cambridge and the Waterloo region, which markets the region internationally. Despite its name, the TTC does not focus exclusively on the promotion of the technology industry but on all aspects of economic development. Waterloo has the best technology sector with lots of high-tech companies. The dominant technology company in the city is BlackBerry which has its headquarters in the city and has several office buildings near the main campus of the University of Waterloo. It’s a great time to buy Waterloo real estate and there are many homes for sale Waterloo that will surely appreciate in value over the years to come.

As 2017 comes to an end and throughout 2018, Waterloo homes for sale should remain at stable prices. Along with the new light rail transit that the combines Region of Waterloo and Ontario Governments have invested over $1,000,000,000 into, there are many condo towers popping up in the City. This is a drive towards intensification and for this reason, condos will be available in Waterloo at excrement deals due to a formidable supply. Condos are a large part of Waterloo real estate that will continue to become more and more successful for decades to come.

But this isn’t to ignore single-family housing. The number of single-family homes will rise slightly as the country is available for new construction. The construction of detached houses will remain stable in the near future. The purchasing power behind this increase comes from mobile or repeat buyers. Among these categories of buyers, the demand for these houses is strong. To increase the available space for the construction of a single apartment, the fact is that the restrictions were eliminated. This will continue to grow in the next two years in order to build single-family homes. Prices for these family homes are expected to rise slightly.

Historically, Waterloo had no high school until the 1960s. In 1958, Waterloo got the lead to build its own high school, and $ 1,247,268 was put aside to build it. Finally, the high school was built on a 20-acre site. The school was appointed to the Collegiate Institute of Waterloo and opened its doors on September 6, 1960. This construction opened the doors of the Flood class to speak. Waterloo opened several gymnasia in the 1960s.

With regard to the K-12 education system, Waterloo is one of the best. Ontario (Waterloo is separate) has one of the best K-12 education systems in the world. The Students ranks in their high-level system in science, mathematics as well as reading. The OECD International Student Assessment Program unites these international ranking lists. They decipher that Ontario students are consistently at the forefront. Parents living in the Waterloo region can rest assured that their children visit some of the best schools in the world.

John Helliwell of PC Mag wrote in 1985 that Waterloo is as close to a university city as you will find in Canada. He quoted the 22,000 students from the University of Waterloo and Wilfred Laurier in support of this observation. Helliwell added that these two universities were a good deal for Waterloo. Many companies have been separated from the university’s presence and Waterloo has a thriving academic community.

In all, buying Waterloo real estate is an excellent idea. There are many homes for sale in Waterloo and any individual or family who moves here is sure to find themselves in an area with one of the best quality of lives not only in Canada but in the world.